Dr. Mehmet Oz was first introduced to the viewing public as an occasional guest on Oprah’s daytime talk show. He was easily one of her most popular guests and segments with Dr. Oz were always highly rated. The man was personable and
knowledgeable and always managed to entertain and educate at the same time. In September of 2009, Dr. Oz was given his own show. The first few seasons were highly rated and critically acclaimed but then something changed. The shows stopped being about informative, medical news and changed to something a little more jaded, a little more dubious.

To many critics, the Dr. Oz show had morphed into just another infomercial, shilling for the various weight loss pills, powders, drinks and other concoctions under a coating of “science” and talked up by America’s favorite doctor. A 2013 Yelp reviewer even referred to the show as nothing but an endless infomercial after being at a live taping.

Things would only get worse for Dr. Oz and the show from there.

On June 19th, 2014, Dr. Oz was asked to appear before the Congressional Subcommittee on Consumer Protection, Product Safety and Insurance. The purpose of his appearance was to answer questions about why his show had devolved into an advertising medium for questionable products that he knew lacked scientific backup. Chairperson of the Subcommittee, Senator Claire McCaskill (D) particularly called into question the use of overblown language in regards to green coffee beans and another supplement called garcinia cambogia. In both cases, words used by Oz on his show did not match the reality especially in terms of valid scientific studies. Senator McCaskill also wanted to know why Dr. Oz felt compelled to use words that would give false hope to people who were desperate for a weight loss miracle.

The Federal Trade Commission had already taken the sellers of the green coffee beans to task with a lawsuit filed in May of 2014. That suit alleged that the makers of the supplements purposely used deceitful ads that were designed to look like news sites as well as ads that were meant to look like real pages from various health magazines. But, Dr. Oz was still citing weak or disputed scientific studies to tout these products on his show even after it was shown that every study in regard to the green coffee beans was either too small to be considered valid or was short term in duration.

For the second product, carcinia cambogia, the science is even more doubtful. In fact, most studies show that it is not at all effective in terms of overall weight loss nor in terms of any of its other claims. Dr. Oz promoted it on his show with a screen saying “no effort, no exercise, no diet” and himself called it a “revolutionary fat buster”. In that same show, he mentioned “brand new scientific research” which he said supported these claims when the latest research does just the opposite.

Oz Responds, but Evades and Deflects

Dr. Oz was evasive in questioning, trying to deflect many of Senator McCaskill’s direct questions. He was openly dismissive of some of the problems of someone with his status shilling potentially unsafe products. And then, finally, he was slightly apologetic and tried to give some excuses for why he used what he called “flowery language” in reference to some of these products. 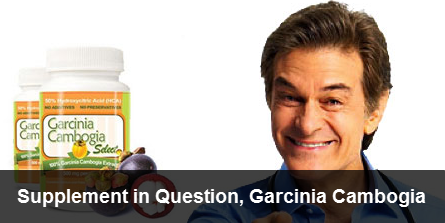 His explanation was that the American public did not want to hear “eat less, move more” to help with weight loss and that they were looking for the easy fix.

While that may be true based on the sales of the supplements that line shelves across the nation, some people might have actually taken the words to heart coming from their much beloved and trusted television doctor. Instead, he chose to be a “cheerleader” and allow people to take the easy route.

The FTC Warns About Diet Pills and Supplements

In response to this scandal and the many, many supplements out there, the FTC issued several warnings to people including the reminder that the supplement industry is largely unregulated and you may never know what you are actually getting. Additionally, there are several things that you can look for in a company’s advertising to let you know that the product is probably bogus and you should just save your money. These include:

For his part, while Dr. Oz certainly knew what he was doing when he talked about these products on his show, there are a number of instances where his likeness and implied endorsement is used without his consent. He has repeated this statement over and over and even tells people to check his website to see if a product is something that he has recommended or okayed before buying anything especially via email or through an internet banner ad.