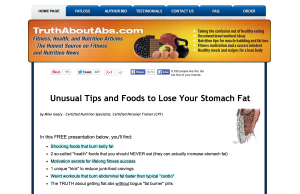 Price:  $39.95 one time
Cheapest Place to Buy: TruthAboutAbs.com
Type of Diet: All Natural Techniques
Guarantee: 60 Day Full Money Back
My Rating: 8.5 out of 10

The Truth About Abs, The Low Down

Back in the old days, people (men, mostly) tried to get huge biceps like their favorite body builders. It was just what people did. For a while, it was all about the triceps and then for a very brief moment, the back. Now, it seems that everyone is trying to get their own six pack- that rippled tummy of their dreams.

In this review we will look at whether The Truth About Abs can deliver on its promises and give you the amazing abs that you want or if you will be left with a bad taste in your mouth and an untoned middle.

Who is The Face Behind the Truth About Abs Diet?

Written by Mike Geary, The Truth About Abs is sold as a comprehensive workout program that will give you rock hard, six pack abs while raising your metabolic rate and allowing you to burn fat all day long. You receive the spiral bound workout plan that features short, intense, interval training and ab specific exercises. You also get the food and nutrition plan complete with the “healthy foods you should never eat!” and the “fat burning foods you should eat every day”.
Mike Geary is listed as a “qualified nutritionist” and a personal trainer. While he does hold a Bachelors of Science degree, it does not specifically say “nutrition” which is interesting.

Most of the reviews and blog posts skip over the fact that Geary is also an online marketer pulling in millions of dollars with his program plus the affiliate program that is attached to it. Hey, no one can fault the guy for making some money from his idea, if it is a good idea, right? So, let’s take a closer look and see if the Truth About Abs actually lives up to all of the hype.

The Claims vs. The Facts

I am going to do this a little differently this time. Let’s look at each claim individually and see if it holds up to the sniff test.

Claim 1: The workouts will increase your metabolic rate.

The Facts: The workout features short, intense interval training style programming which is sometimes referred to as HIIT training. HIIT training does have science on its side. When you work out at higher intensities than you might be used to, your body will need the extra time to recover. While your body is recovering it is still burning calories.

Claim 2: This program will work for everyone, male or female.

The Facts: There might be a problem here. The universal, one size fits all approach to fitness has been called out time and time again. Look- men and women are biologically designed to store fat in different ways. Women are designed to store excess fat in the lower body first. Men typically gain weight in the abdomen first which is why you see these guys with big guts, no butts and little chicken legs. It is genetics, it is biology and to a smaller degree, diet and lifestyle.

Geary does not differentiate between these differences and there is something more. The sales pitch itself mentions that you will “start to lose fat and your muscles will start to grow.” Uh, hold on there, Mike Geary! For some people, that whole growing muscle thing might be a problem because it will cause their stomach area to be bigger and bulkier not the toned, lean and ripped look they are going for. Do you even mention that?

Finally, on this claim: some people can be at their very fittest. Body fat percentage in the low single digits. Healthy, toned everywhere but no abs. No magical six pack to show off at the beach. No rippled lines or carved out obliques. Did they do something wrong? No. They did not. This does not get mentioned by Geary or any other fitness guru but it needs to be said: not everyone is going to have popping muscles. Not everyone can have a six pack because their muscles just will not ever show like that. It is a fact. It doesn’t mean that you are not fit with a tight, strong core- it just means that you don’t have the flashy, show off muscles.

Claim 3: Working mostly the abs is the way to go.

The Facts: If you focus on just one area of the body you will do: nothing. That’s right. You might feel sore for a few days and think you are really on to something but eventually your body will get really good at those exercises and they stop working. You can’t spot reduce but you can overtrain meaning that you can’t focus on one spot and make it leaner but you can make the muscles there bulkier and potentially damage them.

When you work just the front of your body you neglect the rest of your core. The core, which you have probably always thought was just your belly is more and encompasses your back and your hips. That whole area, the trunk of your body is the key to movement in other exercises, helps improve your posture and just makes you look fitter. But, if you are only working part of your core, you are not getting the full benefit. In fact, most fitness experts say that for every move you do for the front of your body, you should do two for the back. Weak back= weak core.  Weak back= no six pack for you.

The facts: There is no magic food of any kind. Even the so called, negative calorie foods like celery are not magic. The truth is, the foods that we eat plus the exercise that we get plus other factors like genetics, our general health and more will play a role in how quickly we burn calories or lose weight. There is not a particular food that you can eat that will change this so dramatically that it is magic. Yes, you can eat spicy foods and that will spike your metabolism, slightly. Yes, you can eat pineapple which aids digestion. None of these things are magic though. Stop trying to make magic foods happen, Mike!

Claim 5: There are “healthy” foods that you should never eat.

The Facts:  No one tells you exactly what these foods really are but seriously if they are “healthy” why wouldn’t you eat them? According to Mike Geary these foods will increase your abdominal fat.Uh, just a second there, Mike. We covered this already. There are no specific foods that will contribute directly to stomach fat because that depends on how your body stores fat, how much of the food you have eaten and other factors. But, here is this “qualified nutritionist” listing these foods and telling you to stay away. Once upon a time, people stayed away from fat. The marketers went absolutely insane with low fat this and low fat that. And everyone just got fatter and fatter. See,fat was not the mythical boogie man that people thought. You cannot just wholesale blame fat on a food, a food group or a macronutrient.

Claim 6: You can have a six pack in six weeks.

The Facts: Oh, Mike. Whatever will we do with you on this one? Look, it does not take a rocket scientist to figure out that this is bunk. Sure, if you are a person with 10, maybe 20 pounds to lose plus the predisposition for showy abs in the first place, then heck yeah, six weeks is perfectly right. But, for the person who has more weight to lose or has a hard time building muscles (and for those poor souls with the shy muscles) six weeks is not going to cut it.

The bottom line is simple. There is some interesting and useful information in the nutrition plan here but there is also some shaky science, some hype and some pure out wishful thinking as well.

And Now For a Few Negatives, The REAL Truth About Abs

While I will agree there are some good parts of this program, there are some not so good things as well. We covered some of the problems in the claims section but there are a few others as well. This is not your typical workout program where you pop on a disc and follow along with the exercises- you can’t even download the program. What you get Iis a spiral bound book with pictures of each exercise. Pictures are great for people who already know a thing or two about fitness and complex exercises but for beginners? The pictures might leave them feeling frustrated and confused. This can be remedied by Google searching the exercises by name but after you have paid for a program why should you do the extra leg work to find out how to do it?

Some of the foods with the nutritional plan are quite expensive and are likely to be out of the budget for some people, especially people with families. There are some alternatives suggested for these foods but the plan itself relies on the glycemic index which again, does not work for everyone. The plan doesn’t offer a lot of options for people who follow certain food plans for health, religious or ethical reasons either.

And now, for the negatives regarding the business side of this. Look, The Truth About Abs is a product and like any other product there are negatives about it. First, there is the really cheesy and kind of dated advertising. Come on, Mike. You are a millionaire, you can’t spring for a better sales video for your product? But, the more serious business claims move beyond the dated advertising. There are many complaints that refund requests are not being honored and that follow up emails and contact attempts are frequently ignored. There are also some claims about the reviews on Amazon including two of the four, five star reviews there. Those two reviews (Ana and Liz) are highly suspicious and make weird claims almost from the start making even the most trusting of people kind of scratch their head. If these are truly faked reviews, then the five star reviews are down to 2. (The other Amazon reviews for the Truth About Abs are: one 2 star and four 1 star.)

Finally, the one we all kind of see coming and dread all the same: the upsells. Just researching the site will be an experiment in tolerance and patience because every time that you try to leave the page another “don’t go” page will pop up. It is frustrating to try to click away and be met with four or five additional pages.

Final Verdict: Truth About Abs Can Work if YOU Work

I am not going to say this is the worst thing in the world but it could certainly be better. There is nothing really new here- I mean, we have all seen this stuff a million times. For a brand new exerciser, especially one who has never really done a lot the pictures of the exercises are going to be frustrating, confusing and of little real use. But, the program could potentially work under certain conditions.